Finally! I’m on the home stretch with the fourth novel in the Highway Mysteries series, Sundown on Top of the World. It’s been two long years since the last book, Sea to Sky, was made available to fans of the series. I had hoped that my big move from a small farm near the U.S.-Canada border south of Vancouver to a large ranch in the South Cariboo of British Columbia wouldn’t delay the new novel’s completion by more than six months, but that was obviously not the case! In addition to the disruption in my work schedule caused by the move, it turned out that Sundown on Top of the World required many, many more hours of research than I’d anticipated. Let’s hope it was worth the wait!

Here’s a sneak peek at the cover (with thanks to the talented Steve Johnsen): 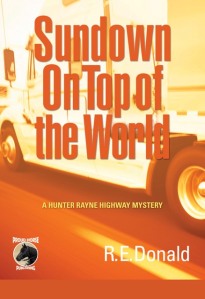 The novel is named for the Top of the World Highway that connects Dawson City, Yukon with the town of Tok, Alaska. There aren’t many communities at that latitude, and the one I chose as a major part of the setting is the town of Eagle, Alaska. I have to confess, I’ve never been there, although I’ve been to both the Yukon and Alaska several times. Hence the research. I’ve had to take the usual liberties for the benefit of the story, and I hope any Northern residents who read this book will forgive the inevitable errors I’ve made in depicting life in their part of the world. It’s a wild and beautiful land, and the people who choose to live there are strong and resourceful. I’ve tried to capture the North’s unforgiving beauty and the individuality of its inhabitants in my story.

Sundown on Top of the World will be available for pre-order on Amazon in a few days, and ready for download/purchase by the end of February. A print edition will be available soon afterward. Unfortunately, it will be the end of May before the ebook edition becomes available on Kobo and iBooks, or from Barnes & Noble.

I’ve really enjoyed writing “Sundown”. It led me to reminisce about my visits to the Yukon and Alaska, starting in about 1980. Memories of former friends and lovers, some now gone forever, touched me as I wrote, and the same emotional time-travel occurred for our hero, Hunter Rayne, while he was in the North. I sincerely hope mystery lovers enjoy reading “Sundown” as much as I’ve loved writing it.

Ruth on the “dome” above Dawson City, overlooking the town and the Yukon River – 1985