During this difficult time when so many people are self-isolating at home and worrying about how life will change for them and their loved ones during and after the global pandemic, the digital editions of the first three (so far) of the Highway Mysteries series have been discounted from $4.99 to $0.99.

I hope returning to the more stable decade of the 90s and following a “Lone Ranger” of North American highways will provide a brief and interesting distraction.

Read on for descriptions of each of the books and links to purchase at most major e-book retailers. The discounted titles are Slow Curve on the Coquihalla, Ice on the Grapevine, and Sea to Sky.

If you’re a fan of the traditional mystery, like many of my readers, you just might find yourself hooked on the Highway Mysteries. Here they are, in order. I invite you to give them a try!

Slow Curve on the Coquihalla

When a well respected truck driver, the owner of a family trucking business, is found dead in his truck down a steep embankment along the Coquihalla highway that winds through the mountains in British Columbia, his distraught daughter wants to know how and why his truck left the highway on an easy uphill curve.  This compels Hunter Rayne, a fellow trucker and retired RCMP detective with daughters of his own, to help her find answers.

As he uncovers signs of illegal cross border activity originating in a Seattle warehouse, Hunter recruits an old friend, an outlaw biker, to infiltrate what appears to be an international smuggling ring.  But while Hunter follows up clues and waits for critical information from his old friend, the wily biker starts to play his own angles. Finally, putting all the pieces together, there in the dark on the same uphill curve on the Coquihalla highway, Hunter risks it all to confront the murderer.

Slow Curve on the Coquihalla is the first in a traditional mystery series featuring “semi-” professional sleuth, Hunter Rayne.  After serving over 20 years in the Royal Canadian Mounted Police and becoming a skilled detective, Hunter resigned from the force and took to the road as a long haul trucker.  His ex-wife is convinced he is running away from the personal tragedy that made him leave a job he loved.  Hunter himself doesn’t know why, he only knows he has to keep following the white lines.

See reviews for Slow Curve on the Coquihalla

This is a great read for anyone who likes mystery, intrigue and those that are looking for good reads from up and coming Canadian authors.

This series is mysteries at their best. Slow Curve On The Coquihalla is a police procedural as well as a first rate who-done-it. Author Donald plays fair with her clues in this well crafted mystery. Interesting characters and occasionally lyric descriptions of the Canadian West are a bonus.

Ice on the Grapevine

A finalist for the 2102 Global Ebook Award in Mystery Fiction

The story opens on a July morning with the discovery of a frozen corpse at a brake check just south of the Grapevine Pass in L.A. County.  Hunter Rayne, a retired homicide detective turned long haul truck driver,  is in southern California making a delivery, and is persuaded by his irascible dispatcher, Elspeth Watson, to help clear two fellow truck drivers who are arrested for the murder.  His job is made more difficult by the fact that the suspects, a newlywed couple, won’t speak up in their own defence.

The circumstantial evidence is strong, and a rookie detective from the L.A. County Sheriff’s Department is eager to score a win.  The investigation crosses the Canada-U.S. border when the victim is identified as a second rate musician from Vancouver, and it turns out there were more than a few desperate people happy to see him dead, including the accused couple.  Hunter has to use all his investigative skills to uncover the truth.

Hunter’s ex-wife maintains that by taking to the highway Hunter is running away from his past, but he believes that the solitude of days on the road is helping him to heal from guilt over the failure of his marriage and the suicide of his best friend.  His life gets more complicated when he feels an unwelcome attraction for a lawyer representing one of the accused. Tangled relationships and multiple suspects emerge throughout the novel, as Hunter butts heads with more than one officer of the law to solve the crime.

Ice on the Grapevine was a finalist in the mystery category of the 2012 Global Ebook Awards.

See reviews for Ice on the Grapevine.

Digital and/or paperback editions available at the following online retailers:

Sea to Sky is the third novel in the Hunter Rayne highway mystery series.  It’s now available in both digital and print editions.

Digital and/or print editions available at Amazon, Chapters/Indigo, Barnes & Noble, Kobo, Smashwords, or iBookstore, or order through your favorite bookstore.

Sea to Sky is also available in a German language edition.

Sundown on Top of the World

A finalist for the 2016 Whistler Independent Book Award in the Crime Fiction Category!

Former homicide investigator Hunter Rayne follows the white lines northward on the Alaska Highway, but a truck breakdown forces him to take an unscheduled stop in Whitehorse, Yukon, where he had been stationed as a rookie cop. While his Freightliner is awaiting repairs, Hunter and fellow driver, Dan (Sorry) Sorenson, kill time with a side trip to bush Alaska where a chance meeting with a young Alaskan woman awakens his interest in a baffling cold case. A reclusive trapper and his young girlfriend disappeared from a bloody cabin 25 years before, leaving their sled dogs chained outside.

Sundown on Top of the World is available in digital and/or trade paperback editions at   Amazon,  Kobo, Smashwords, Barnes & Noble,  iBooks, and other online channels.

BUY THIS BOOK IN THE PRINT EDITION: ISBN 978-0-9881118-82, on Amazon or Chapters/Indigo, or order it through your local bookstore in the print edition. 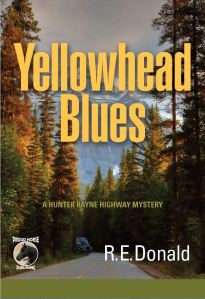 Just west of the Rocky Mountains, a frightened horse with a bloody saddle is found running loose on the Yellowhead highway. Former RCMP investigator Hunter Rayne is on the road in his eighteen-wheeler when he’s flagged down to help calm the horse and find its missing rider.

The horse with the bloody saddle leads Hunter and a good-natured French Canadian cowboy into a complicated murder mystery. The police are none too happy with his interference, but Hunter strongly believes the RCMP have arrested the wrong man and sets out to uncover who stood to gain from the death of a wealthy ranch owner.

His belief in the suspect’s innocence is shared by a rookie female RCMP constable who joins him in the search for the truth. She befriends the dead man’s young fiancé in an effort to get answers, and discovers that the vulnerable Texas beauty is not who the victim believed her to be.

This is the fifth novel in this unique mystery series set on the highways of North America.

Print editions are available at Amazon or Chapters/Indigo, or can be ordered through your local bookstore. The ISBN is 978-0-9940762-50

What readers are saying about the Highway Mysteries:

“Love the author’s books. Excellent characters and settings. She is now on my short list of current favorite authors.”

“This series is beautifully researched, vividly written, and always captivating. It respects the nobility which resides in everyone while portraying some unforgettable characters.”

“I love the way the main character, Hunter Rayne, thinks, interacts with people, and in general would put him into the lofty echelons with Adam Dalgliesh, Morse and the Hon. Det Lynley. Great and satisfying series.”

“Hunter is the man. Donald has written a super story that would make a good movie. I think we have another Harry Bosch character.”

“… great writing, excellent pacing that sucks you in right away and makes you forget about the world around you, characters you like and who talk and act the way real people do, set in a place that makes it feel like an adventure, and best of all– a wicked smart plot.”

135 thoughts on “The Highway Mysteries – a series for mystery fans”